Bus From Kuala Lumpur to Penang

Known as the City of Contrasts and Diversity, Kuala Lumpur is one of the most popular cities in Southeast Asia. From gleaming skyscrapers to eye-catching natural attractions, there is a lot to see in the capital of Malaysia. KL was established in 1857 and has had a rich history. It is a federal territory and the largest city in the country. Kuala Lumpur's main hub is the Golden Triangle, comprising KLCC, Chinatown, and Bukit Bintang. You will also find many options for shopping and food here. There is a lot to explore, from hawker stalls to posh restaurants, for anyone visiting this place. Many operators provide buses from KL to Penang as tourists and locals travel on this route very frequently.

Situated in the Peninsular Malaysia region, Penang is a beautiful state that attracts many tourists. It is called the Pearl of the Orient for its beautiful sandy beaches. Besides tourism, people come to Penang for various purposes like occupation, family, and education. The state is an economic powerhouse known for its festivals, museums, art, and architecture. George Town, the capital of Penang, is also famously called the food capital of Malaysia. People visit Penang to witness places like Pinang Peranakan Mansion, The Habitat Penang Hill, Street Art in George Town, and TeddyVille Museum.

Things to do in Penang

The various things to do once your KL to Penang bus reaches its destination are:

The city is already famous for its street food. Thus, many travel from Kuala Lumpur to Penang to tickle their tastebuds with the city's delicacies.

Places to visit in Penang

Some of the most important places to visit once you get down from your Kuala Lumpur to Penang bus are:

Considering the climate conditions, you should visit Penang between November and January. During these months, rainfall is minimal, and the temperature is perfect for tourists.

Many important and exciting festivals/events occur in Penang annually. From the end of January to February, the Kek Lok Si Temple lits up for the Chinese New Year. The display here is beautiful, attracting many people from all over the country and outside. Here, you can also enjoy the Thaipusam festivities.

The Penang International Food Festival is held in April for two weeks. During this month, you can witness Vaisakhi celebrations here. May witnesses a huge procession during Wesak Day.

During Ramadan, there are several bazaars where people can shop. In June, you can enjoy the George Town Festival. It is the month when the Penang Durian Festival starts, which goes on until July end.

The end of September- early October is when the Nine Emperor Gods Festival is held. It is celebrated for nine days, beginning on the 9th day of the 9th Lunar month. People follow a vegetarian diet during this time, and you can see the fire walking ceremony and colorful procession. November's annual Penang Bridge International Marathon is held on the First Penang Bridge. Apart from these, you can enjoy Christmas and New Year's Eve celebrations here.

Bus from KL to Penang

There is usually a rush on every Kuala Lumpur to Penang bus, and to avoid last-minute travel plans, one must try to pre-book their tickets from redBus. You can book your bus from KL to Penang with any of the bus operators that offer their services along this route.

The boarding points for a bus from KL to Penang are -

The drop-off points for a KL to Penang bus are:

You can pre-book your bus online ticket at the following bus companies. The ticket price is 25 MYR to 40 MYR, and the travel time taken by most buses is around 5 hours.

When travelling from KL to Penang, you can easily book your bus ticket online via redBus.

Are you looking for affordable bus tickets from KL to Penang?

To get affordable bus tickets from KL to Penang, you can book bus tickets online on the redBus website/mobile application.

Within Penang, buses are the main form of transportation for locals and tourists. You can book a bus online ticket to travel to different areas of the state. You can also find taxis to travel from one place to another. Don't forget to use the Penang Hill Railway that takes you to the top of Penang Hill.

How to book Kuala Lumpur to Penang bus tickets online on redBus?

To book Kuala Lumpur to Penang bus tickets online on redBus, follow the steps mentioned below - 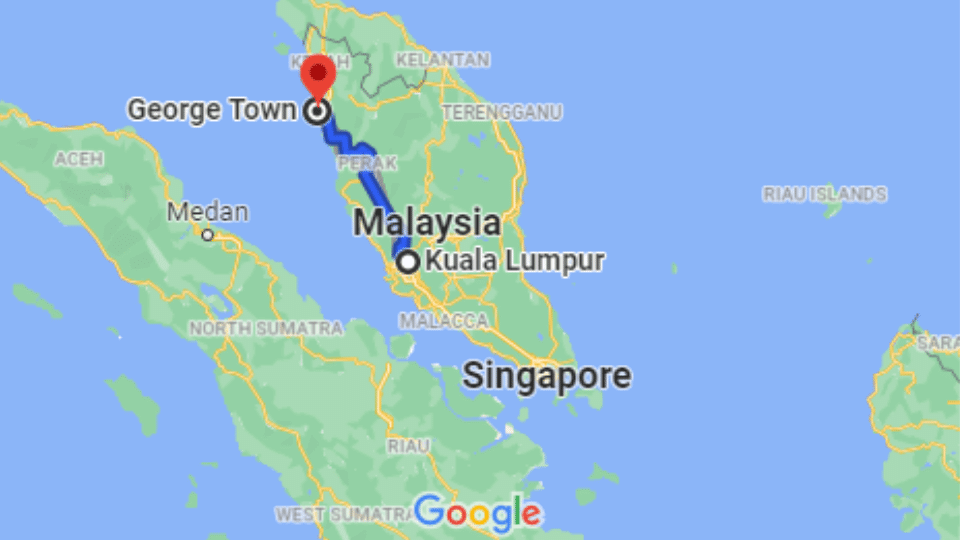 Where is the pick-up and drop-off points for the KL to Penang Bus?
The KL to Penang buses start from various points in KL, including TBS, Terminal KTM, and Hentian Duta, while the drop-off points include Penang Sentral and Sungai Nibong.
Which is the best offer for Kuala Lumpur to Penang bus tickets on the redBus platform?
The offer of upto 20% off on Kuala Lumpur to Penang bus tickets is, indeed, the best offer on the redBus platform as customers can save a lot on their totale bus ticket price.
How much does a ticket for a bus from Singapore to KL?
The average price of a ticket is around 45 MYR. However, tickets can be as cheap as 32 MYR or go up to 59 MYR depending on the travels and tours you opt for. The buses come with varying degrees of amenities based on the operator you choose.
How do I book a bus from Kuala Lumpur to Penang?
You can either visit the terminal and go the booth belonging to the bus operator of your choice, wait in line, select a seat, and book your ticket. If you’d rather not do that, you can visit www.redbus.my and book your seat within 5 minutes.
How can I make an online bus ticket booking in Malaysia?
You can book a bus of your choice to any destination in Malaysia by logging on to the official website of redBus which is www.redbus.my . The site is user-friendly and you can book your bus ticket in a matter of minutes.
How can I get cheap bus tickets for Kuala Lumpur to Penang buses?
redBus offers a ‘bus pass’ facility for Kuala Lumpur to Penang buses on selected buses. If you are traveling with one of these operators and you travel on this route quite often, you can grab an amazing discount on your bus trip by opting in for the bus pass.
TOP BUS OPERATORS

A globally recognised bus booking portal, redBus offers the best prices in the market, thereby making your bus booking experience all the more satisfying. redBus provides updated prices and bus schedules of the top bus providers that operate in the region. Customers can complete their payment through the secure network and receive the confirmation of the same in a matter of seconds. Book a bus ticket online through redBus and travel from Kuala Lumpur to Penang by clicking on the link provided below: https://m.redbus.com/bus-ticket/kuala-lumpur-to-penang

redBus caters to every Spanish speaker as well. Click on the link provided below to find out more: https://m.redbus.com/es-419/pasajes-de-bus/kuala-lumpur-a-penang

You can search for return bus tickets online easily when you book a KL to Penang bus on redBus. To do this, you will have to put in your return date while searching for KL to Penang buses and then choose a bus available from Penang to KL .

There is another method of booking the return journey. After choosing a bus from KL to Penang, you can select the option for adding return tickets from the top right-hand corner on the redBus website.

Looking to book a ferry ticket in Malaysia? Check out here!